Using waste ground coffee to grow mushrooms, create a make-do-and-mend culture and find ways to stimulate a ‘sharing economy’ were at least three ideas for a ‘Smart City’ I didn’t see coming. They were given to me at Leicester’s first Proaction Café at the LCB Deport. I was asked to host a table at the event and seek a solution to my challenge – in my case consulting people on what does Leicester as a Smart City mean to you? It is part of what hopefully be a series of Proaction Café’s in the city led by Leicester Interchange. Billed as ‘Idea Generation’, the event invited people to come to support others to generate ideas on how they can address social issues that affect the lives of Leicester’s residents. Around 30 people joined the session and they were invited to choose which subject they would like to contribute to from the five table hosts at the event.

I was invited to share my question and get their input in a first round of consulting before deepening the question for a second round of talks with new participants. Leicester’s event was based on the original concept of Pro Action Café – a blend from World Café and Open Space Technology. I gathered lots of useful ideas which I have already fed back to De Montfort University’s Smart City theme board, some of the work on which I have written about previously. Using waste ground coffee to grow mushrooms, create a make-do-and-mend culture and find ways to stimulate a ‘sharing economy’ were at least three ideas for a ‘Smart City’ given to me that showed the vibrancy and diversity of the discussion.

After the event, the organiser asked me, the following questions, which I have answered here:

The most important thing about the Proaction Café is that it brings new audiences closer to you in order for you to gain ideas and feedback. The structure of the event means there are lots of contribution and an evolution in the discussion to really hone in on some of the best ideas or refocus your question in order to get the most useful suggestions.

I am now a keen advocate of the Proaction Café idea. I would like to see it develop so even more people got involved, both in bringing ideas and contributing. It has the potential to become a regular fixture in the city’s calendar.

As a direct result of the session I was able to feedback to colleagues the ideas that had been generated. The findings of the Smart City project at DMU is contributing to future strategies being devised by Leicester City Council, so only time will tell how things move forward. This is the first in more widespread consultation, but has already made a contribution to our thinking.

I would love to hear from people about what their Smart City views are. There are many definitions of what a Smart City is and many ideas of how communities across the UK and the world could benefit from smart ideas. Email me on mcharlton@dmu.ac.uk or:

There is still a competition running where you tell us what you think a Smart City is to be in with a chance to win a £100 Amazon voucher. The deadline date has been extended to June 19th.

* The next Summer Proaction Cafe is penciled in for Wednesday 14th June at the LCB depot, Leicester. Save the date!

I’m Mark Charlton, Associate Director of Public Engagement at De Montfort University, Leicester, United Kingdom. I’m passionate about universities using Service-Learning, community-based learning, civic learning, the scholarship of engagement, learning-linked volunteering and all the other ways we describe students sharing their skills and knowledge beyond the campus. I encourage all staff and students to embed the UN’s 17 Sustainable Development Goals into their work. I also lead the United Nations Academic Impact Initiative Global Academic Hub for SDG 16. I am a PhD Scholar, researching the impacts of civic engagement on students’ political participation. View all posts by Mark Charlton 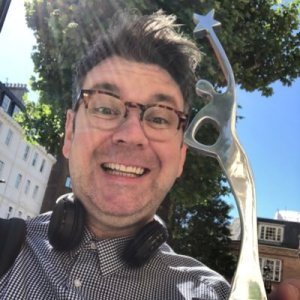 I’m Mark Charlton, Associate Director of Sustainable Development Impact and Net Zero Research Director at De Montfort University (DMU), Leicester, United Kingdom.  I’m passionate about universities working with businesses and communities on ideas to tackle climate change and achieve the 17 United Nations Sustainable Development Goals. I am an advocate of Public Engagement in Research and Citizen Science as well as Service-Learning, community-based learning, civic learning, the scholarship of engagement, learning-linked volunteering and all the other ways we describe students sharing their skills and knowledge beyond the campus.  I currently lead the United Nations Academic Impact Initiative Global Academic Hub for SDG 16 at DMU. I am a PhD Scholar, researching the impacts of civic engagement on students’ political participation (SDG16). Contact me via mcharlton@dmu.ac.uk